Born in Wiltshire, United Kingdom, in 1948, Richard grew up in a household that was frequently filled with the smell of turps and linseed. His father was a keen painter and it was his dad’s influence that enabled him to get to grips, from an extremely young age, with the fundamentals of drawing and perspective. It’s probably in the genes, as Richard’s sister, Sally Williams, is a  painter, and his eldest daughter Emily also paints.

Richard spent a number of years in the music business, struggling to make a living playing guitar in various bands, before finding alternative creative outlets, first running a joinery business, and later, a business designing and making furniture and bespoke kitchens. Over the years, Richard succeeded in forging an unerring belief in his ability to master the various trades and skills that he set his mind to. That self-belief has served him well, particularly in compensating for the fact that he has received very little in the way of formal training! 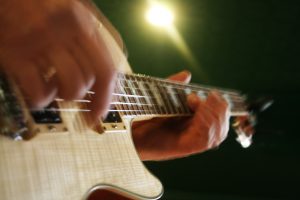 Although he never lost touch with his early painting and drawing skills, it wasn’t till he sold the furniture business in 2014, and moved to Cornwall, that he began to make a serious effort to develop as a painter. Having created the space to paint, it seems to have taken over as the main activity in his life. 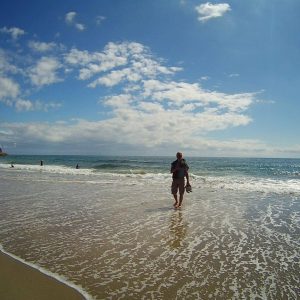 Perhaps because he spent some difficult years in his thirties and forties in analysis, exploring the dynamics of the psyche, he has very little interest in creating art that is an expression of the unconscious and is much more comfortable with attempting to portray vistas and patterns of light that have in some way touched or moved him.

Consequently he spends a lot of time on the cliffs using his camera as a recording device and most of his painting is done back in the studio, trying to bring that impression to life. His earlier works were mostly in watercolour, but in the last couple of years he has painted almost exclusively in oil paint.

“I am an unashamedly fairweather painter. For me, it’s all about sunlight and how it warms and lubricates the landscape, and at the same time lights up our life. I feel blessed to be living on the Cornish coast where the interplay of the elements delivers inspiration in bucketloads.

Although I enjoy watercolour for its immediacy and its potential to portray luminosity, I find the process I am developing with oils, gradually allowing an image to emerge from the primed canvas, is a lot more sculptural and seems to satisfy a deeper part of my character. It is also a lot closer to the way I draw – slowly honing in towards detail.”